In class we were sown a idea of a busy intersection. Then we went on tinkercad and had to try and figure out some way to create something that would make it safer.I decided to do traffic lights. SoI went on tinkercad and did tutorials of how to make a circuit with led lights. After I learned,I made the traffic lights. First I just did it with a red light, green light and yellow light. Then after I figured out that I added a pedestrian light and another set of lights. Here is a picture: 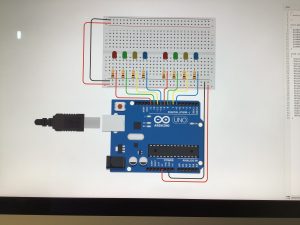 Then we had to code it. First I started coding with blocks because that wears much easier. Then after I got good at it I tried text and that was just as easy. Here is my code: 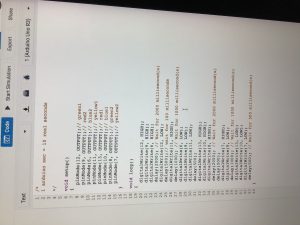 Then afterI finished that made it for real with an actual arduino board. The pieces were much smaller thenI had expected and it was hard to get the wire in the right hole on the arduino board. Then after I completed making itI copy and pasted it from tinkercad to arduino and my code worked.I had a few issues with the way my LED was placed butI easily figured it out. My photo of my arduino