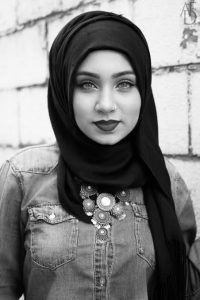 We have all read a book about acceptance, “be who you are”, “don’t conform”, but how many people have read a book about appearance. The book A Very Large Expanse Of Sea by Tahereh Mafi may seem like it’s about acceptance like many other young adult novels but if you look closely, it’s actually about how appearance defines you not only to those around you but to yourself as well.

The Book A Very Large Expanse of Sea is about a Muslim girl, Shirin, living in the US in 2002, a year after 9/11. Shirin is in high school and is just trying to make it through like everyone
‘else with a few extra obstacles. Shirin then finds herself falling for a guy, but does not want to.

You can see how people perceive Shirin right in the first few pages. On page 10 Shirin is talking about her first day at her new school she says “my math teacher looked at my face and gave a five-minute speech to the class about how people who don’t love this country should just go back to where they came from” you can tell first of all she says it so casually that obviously it’s happened before. She doesn’t use words that make her seem like she’s outraged she just saying it as if it happens every day. You can also see that, the way she says “looked at my face” that he was making assumptions about her just by her hijab. The math teacher defined her identity with one look thinking he knew everything that he needed to know about her. Shirin talks about this on page 159 while mentioning another event where people told her “go back to Afghanistan you camel-fucking terrorist.” She says “But It never mattered what I said anymore. people talked over me, they talked for me, they discussed me without ever asking my opinion.” She’s saying that people, just like her teacher, define her by one simple glance and think they know everything.

Now it’s not just people who aren’t Muslim that judge her. On page 195, after she kisses a guy in his car in front of everyone, a Muslim girl (not wearing a hijab) confronts her. This girl says “Girls like you don’t deserve to wear hijab, it’d be better for everyone if you just took it off.” Now this girl as well thinks she knows her just by one thing, and Shirin tells her this, she says “you don’t know shit about how I’ve lived or what I’ve been through or why I choose to wear hijab and it’s not your place to judge me or how I live my life” now as you can see the author uses words like shit to show how Shirin is really angry with this girl. Now, this girl thinks she is somehow better then Shirin just by one simple thing, Shirin wears a hijab.

When this girl, who goes out of her way to tell Shirin she’s a “bad Muslim”, confronts her she responds back. Shirin asks her if she ever kissed a boy and she replies “This isn’t about me” she huffed “this is about you. You wear hijab.” So you can tell it’s not just about the fact that she’s Muslim its that you can see she’s Muslim.

Earlier on in the book on page 95, Shirin is Talking to Ocean (her friend) and he says “I genuinely don’t care that you cover your hair. I don’t mean”—he hesitated— “as long as it’s like something you actually want to do” Shirin then says that she likes it makes her feel in control, she gets to choose who gets to see her hair. You can see from this that Shirin Doesn’t think her Hijab means she’s terrorist or isn’t allowed to kiss people, she just likes having it there because it makes her powerful. This shows that by one simple article of clothing you can be defined in so many ways.

So as you can you can see the book is about appearance and how it’s perceived. The author shows how her teachers and peers define her. It shows how other people in her religion perceive her and what she thinks of herself. Tahereh Mafi could have just made this just a book the same as a lot of other young adult novels but she decides to add another element to it. She didn’t make the book about acceptance she made it about appearance.